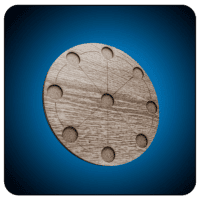 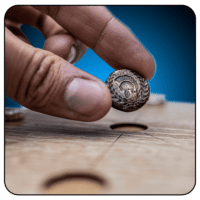 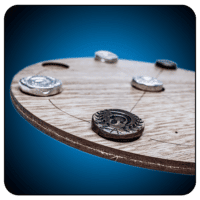 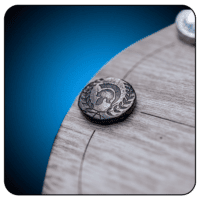 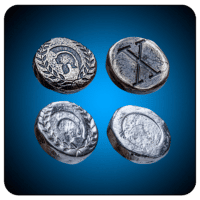 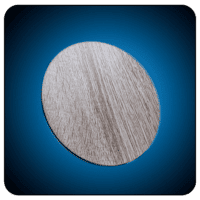 The Board is made on two levels to make it have more depth, the coins with which you play do not fit the cutout circles because it would be hard to get them out, it is a design element. The coins are made of bronze, 3 of them are pure bronze, and 3 are silver plated to distinguish them from one another.

In ancient Rome, people had to make up games for fun just like today. One of the games that the Romans played was Rota, also known as Roman Tic Tac Toe. We do not know for sure what the Romans called this game but we call it Rota, because that is the Latin word for wheel.

Imagine Romans sitting around on the sidewalk while away time playing an ancient board game together. They often enjoyed playing games in other public places, like the bathhouses. Roman soldiers were known to play Rota while waiting in forts for any orders. Anywhere we play games today, you can imagine Romans playing too.

The reason that Rota is called Roman Tic-Tac-Toe is that it is played on a board that has nine spaces and the main objective is to get three pieces in a row. However,  these two games are different because Rota takes longer,  you can move the pieces from their original positions, and unlike Tic-Tac-Toe it cannot end in a tie.