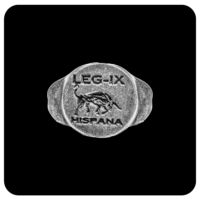 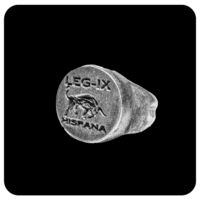 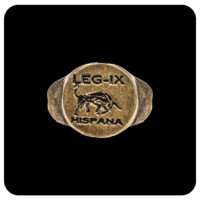 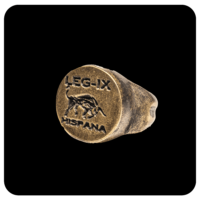 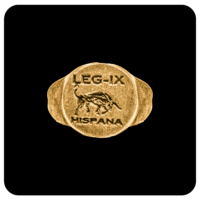 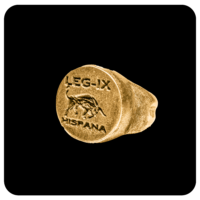 Legio IX Hispana (“9th Legion – Spanish”), also written Legio nona Hispana or Legio VIIII Hispana, was a legion of the Imperial Roman army that existed from the 1st century BC until at least AD 120. The legion fought in various provinces of the late Roman Republic and early Roman Empire. It was stationed in Britain following the Roman invasion in 43 AD. The legion disappears from surviving Roman records after c. AD 120 and there is no extant account of what happened to it.

The origin of the legion is uncertain, but a 9th legion seems to have participated in the siege of Asculum during the Social War in 90 BC.

When Julius Caesar became governor of Cisalpine Gaul in 58 BC, he inherited four legions, numbered VII VIII IX X, that were already based there. The Ninth (IX) may have been quartered in Aquileia “to guard against attacks from the Illyrians”. Caesar created two more legions (XI and XII), using all six for his attack on the Helvetii initiating the Gallic wars.

The Caesarian Ninth Legion fought in the battles of Dyrrhachium and Pharsalus (48 BC) and in the African campaign of 46 BC. After his final victory, Caesar disbanded the legion and settled the veterans in the area of Picenum.

Following Caesar’s rule, Caesar’s ally Ventidius Bassus made attempts to recreate the 7th, 8th and 9th legions, but “it is not clear that any of these survived even to the time of Philippi”. Octavian later recalled the veterans of the Ninth to fight against the rebellion of Sextus Pompeius in Sicily. After defeating Sextus, they were sent to the province of Macedonia. The Ninth remained with Octavian in his war of 31 BC against Mark Antony and fought by his side in the Battle of Actium.

Memorial to Lucius Duccius Rufinus, a standard-bearer of the Ninth, Yorkshire Museum, York
With Octavian, whom the Senate later titled Augustus, established as sole ruler of the Roman world, the legion was sent to Hispania to take part in the large-scale campaign against the Cantabrians (25–13 BC). The nickname Hispana (“stationed in Hispania”) is first found during the reign of Augustus and probably originated at that time.

After this, the legion was probably part of the imperial army in the Rhine borderlands that was campaigning against the Germanic tribes. Following the abandonment of the eastern Rhine area (after the disastrous Battle of the Teutoburg Forest in AD 9), the Ninth was relocated in Pannonia.

In AD 43, the legion most likely participated in the Roman invasion of Britain led by the emperor Claudius and general Aulus Plautius, because they soon appear amongst the provincial garrison. In AD 50, the Ninth was one of two legions that defeated the forces of Caratacus at Caer Caradoc. Around the same year, the legion constructed a fort, Lindum Colonia, at Lincoln. Under the command of Caesius Nasica they put down the first revolt of Venutius between 52 and 57.

The Ninth suffered a serious defeat at the Battle of Camulodunum under Quintus Petillius Cerialis in the rebellion of Boudica (61), when most of the foot-soldiers were made away within a disastrous attempt to relieve the besieged city of Camulodunum (Colchester). Only the cavalry escaped. The legion was later reinforced with legionaries from the Germania provinces. When Cerialis returned as governor of Britain ten years later, he took command of the Ninth once more in a successful campaign against the Brigantes in 71–72, to subdue north-central Britain. Around this time they constructed a new fortress at York (Eboracum), as shown by finds of tile-stamps from the site.

The Ninth participated in Agricola’s invasion of Caledonia (modern Scotland) in 82–83. According to Tacitus, the legion narrowly escaped destruction when the Caledonians beyond the Forth launched a surprise attack at night on their fort. The Caledonians “burst upon them as they were terrified in their sleep”. In desperate hand-to-hand fighting, the Caledonians entered the camp, but Agricola was able to send cavalry to relieve the legion. Seeing the relief force, “the men of the Ninth Legion recovered their spirit, and sure of their safety, fought for glory”, pushing back the Caledonians. The legion also participated in the decisive Battle of Mons Graupius.

The last attested activity of the Ninth in Britain is during the rebuilding in stone of the legionary fortress at York (Eboracum) in 108. This is recorded in an inscribed stone tablet discovered in 1864, now displayed in the Yorkshire Museum in York.

I am very satisfied

The crafting of the ring itself is great, but the writing was off level and lopsided so you can barely read it.

I
Ikad
Good quality, but it had some imperfections.

The rings fits smoothly, and is totally what I expected. The thing is, it came with some scratches and a tiny portion of the surface broken. It makes it unique, but I would have preferred one in a better condition. 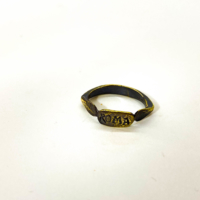 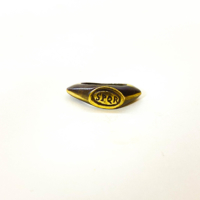 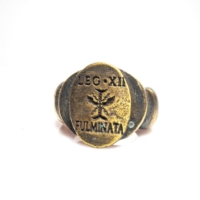 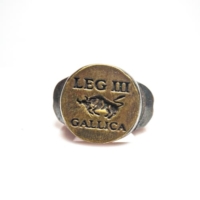 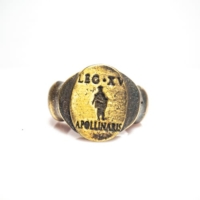 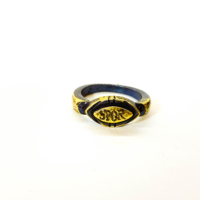 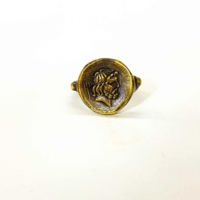 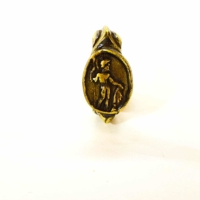